To find out more about each book, select the button(s) below.

Pierre E. Pettinger, Jr. (who was always confused with his dad which is why he goes by his full name) has been a Science Fiction, Fantasy, and Horror devotee since he was ten. Blessed to be born into a family which loved books and encouraged reading from, literally, birth, he has read thousands of books in his lifetime.
He became involved in Dungeons and Dragons shortly after it was first available and played with his college friends for years. He eventually married one of them, Sandy, and they have been happily married since 1981.

They became fans of the masquerade and costuming, these days called cosplay, and have won many awards for their work at Worldcons, Costume-Cons, and many regional and local conventions. Pierre has served as an officer of the International Costumers’ Guild, three years as President and decades as the Archivist and Parliamentarian of the organization.

He and Sandy were fan Guests of Honor at the World Science Fiction Convention in 2018 in San Jose, California. At an after-con get together he mentioned he had dabbled with writing since high school. His friends there, Karen Schnaubelt, Jamie Hanrahan, and Leslie Johnston, encouraged him to pursue it. Since he had recently retired, he decided to take their advice.
The books of the Sodality Universe feature characters and species that have been demanding to have their stories told for over forty years. He hopes you enjoy the ride.

A Brief History of the Confederation


The Confederation is the star nation that is most in focus in the Sodality Universe. It is quite large, being exceeded in size only by the Anamilara Dominion. The Confederation is nearly 1000 light years long (defined as along the curve of the Orion Arm), about 800 light years across and 500 light years thick.
The founding members of the Confederation were the Lepamod, the Navratil, the Chode, the Tsssha Tck, and the Chakoonb. The suggestion for a multi-species nation first arose among the Lepamod. They had already forged treaties with the other three founders as well as several other species. Rather than attempt to achieve agreements between too many species, they decided a less ambitious alliance would be simpler, and then could then draw in other members.
The Confederation was founded approximately 2275 AD by the Terran calendar. While Earth had developed faster-than-light technology, they were only in the beginning of their expansion. The only non-human species they had contacted was the HaChii, with whom they had friendly relations.
The first Administrator of the Confederation was Ooaaoiuiach of the Chakoonb. She was just what the new nation needed. Ooaaoiuiach pushed hard, encouraging exploration vessels in all directions, each tasked with either strengthening alliances with non-member species or first contacts. At the same time she convinced the Assembly to establish a united Navy, rather than the loose alliances of individual member police vessels.
The Confederation made formal contact with Terra and its colonies in 2336. Terra joined the Confederation in 2378. The HaChii, though strong allies of Terra, declined membership, though they maintain good relations with Terra.
Rapid expansion led to tensions with the Chemosh Empire, a large and aggressive nation a bit north and centerward of the Confederation. Tensions came to a head when three worlds settled by humans and Tsssha Tck, and which were technically outside Confederation borders, petitioned to join the Empire. The Confederation protested, insisting that those worlds must either remain independent or join the Confederation. Tensions escalated and negotiations failed. War broke out in 2497.
The war raged for nearly a century. It wasn’t constant. Though both sides could support large fleets, space is so large that it is impossible to completely secure every system. Ships cannot be detected or followed in subspace, so attacking fleets could strike deep into enemy territory. Major planets, mostly the homeworlds of Confederation or Imperial member species, were heavily fortified, but most others weren’t. Several battles would occur in quick succession and then the combatants would retreat to lick their wounds. Generally, a fleet of ships would appear in a system, rapidly destroy the defenders, and take control of the system.
In 2590 a Confederation fleet under the command of Ibhim Tendacta, an En Salinoe, translated into the Berhated system. Mere hours later, an Imperial fleet under the command of the Greatmind Shentos translated in. As the two fleets maneuvered, it became obvious that the result would likely be the near annihilation of both fleets. Rather than engage, both commanders began to talk. These initial talks lend to an eventual peace treaty signed in 2596. Both Tendacta and Shentos were present at the signing.
Thirteen years later, the Confederation and the Empire signed a Treaty of Alliance. This treaty, among other things, regularized a planet’s right to join, or not join, any polity it desires.
Contact with the Laanyr Clan Heer occurred in 2573. The first clashes with the Kralk were in 2635. The Confederation made formal contact with the Animailara Dominion in 2622. That continuing contact has been a bone of contention with the Empire ever since, though it has never risen to the level of threatening the Alliance.
Though the Confederation has the borders described above, its authority is not ubiquitous within it. There are numerous independent systems, small multi-star nations, and a great many unexplored systems and planets. The same can be said of the Empire. Though the Empire used to claim complete authority within its borders, it has come to adapt the Confederation’s view that populations must choose to join. Other nations, like the Dominion and the Kralk, do not share that philosophy and exert control throughout their volumes of space.
By the current year in the novels (The Road from Antioch begins in March, 3258), the Confederation and the Empire are strong allies. The Laany Clan Heer and the Rivnyera maintain friendly relations with the Confederation (their connections to the Chemosh are sparse as they are separated from the Empire by the entire Confederation). The Kralk are an ever present problem. The Dark Circle, if it actually exists, only occasionally causes issues. The Confederation’s relations with the Dominion as trading partners are stable. Their relations with the numerous independent and small nations vary radically from one to another.

I will be attending the following conventions this year.

Costuming
My wife and I have been costumers since 1983. We entered SF/Fantasy fandom in 1981 at our first Worldcon (World Science Fiction Convention) in Denver in 1981. We saw the awards of the masquerade. Masquerades are a very old tradition at science fiction conventions. Unlike the normal use of the word, science fiction masquerades are not costume parties. They are competitions, on stage. Contestants make or assemble their own costumes and show them on stage, often with lights, music, and choreography. Entries range from simple to elaborate, single individuals to large groups, serious drama to humor. Costumes themselves can be original designs, recreations from films, TV, or other media, or extrapolations from existing fictional universes. We became instant fans of the masquerade. We entered our first large masquerade at the 1983 Worldcon, Constellation in Baltimore. Over the decades we have been fairly successful in our costuming career. We have won many awards, including four Best in Shows at Worldcons (1986, 1997, 2000, and 2003). We joined the International Costumers’ Guild shortly after its formation in 1985, and have held several positions. I have been a Chapter Representative, President, and am currently the Archivist and Parliamentarian. Some of our work will appear on this page. 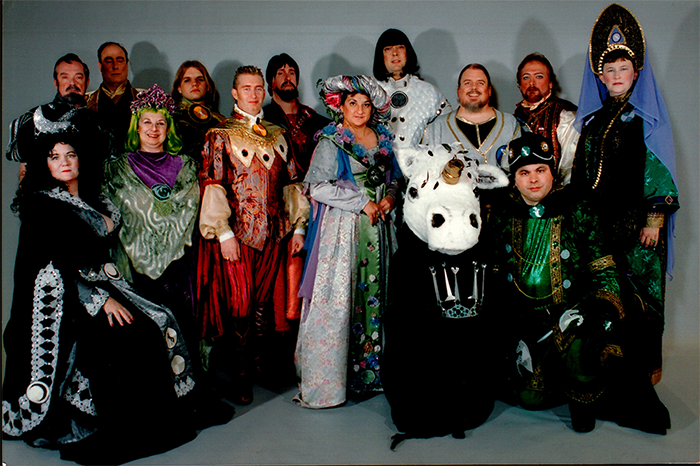 Book 1: The Road From Antioch 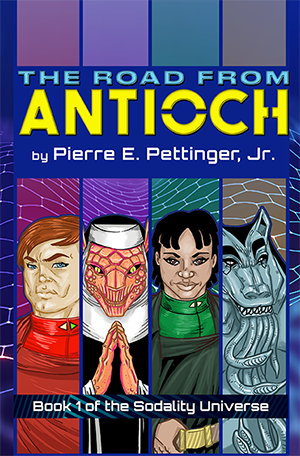 The pilgrim ship Antioch is destroyed just short of the New Vatican.

Someone is stealing critical shipments in the Chemosh Empire.

Two worlds of the Laanyr Clan Heer have been attacked.

Who is behind these incidents? Terrorists? Rebels? The mysterious Cherek? Or someone else entirely? The nations of the Orion Arm must join forces and find the culprits.

The investigation ranges from the space around the planet Ans to the fields of Inohr Dan Nool to the supposedly primitive planet of Cordwainer.

Join an Admiral, a Catholic Sister, a Knight Militant, an Ensign, a Great Mind, an Inspector and a Herdmaster as they seek out the perpetrators of these odd occurrences. 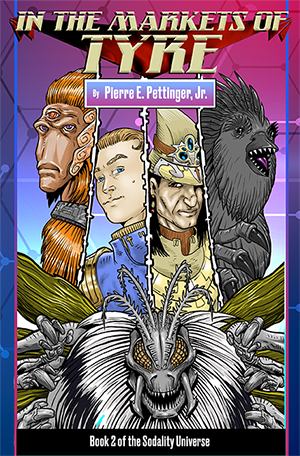 The former Admiral Svenkerud has escaped from Tendacta Station. The Rivnyera think they have found their missing ship construction station. And who attacked Admiral Yar’Adua is still a mystery.

Do these events have anything to do with the attacks on the Great Powers? Admiral Yar’Adua, Lieutenant Taylor, Sister Perpetua Lucy, Sir Anselm and Inspector Magnetskis have a lot to investigate. Joining them are Constable Captain Acharya, Ban Sitar, Ensign Davy Phillips, Ranul Three !toc!-Flock-in-Exile and Brother Man John as the mystery deepens.

From Tyre Primus to the rogue planet Jerundhusn to Tyre Secundus clues are unearthed and leads are followed. And someone seems determined to stop all of them with violence. 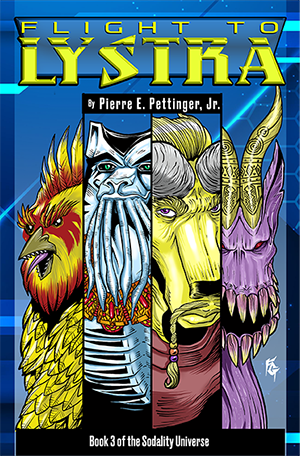 The investigation of the mysterious attacks on the Great Powers of the Orion Arm continues.

While the Confederation seeks answers among the Anamilara and the Singruld and the Church tracks down a missing station for the Rivnyera, the other Great Powers are also busy.

The Great Mind Threetgsh investigates unrest in a new member of the Empire. A peasant boy among the Bhom is swept up in intrigue in the royal caste.

Herdmaster Sunish pursues the renegade Yud into the Lystra family. And Taran of the Kralk seeks vengeance against the strangers who have attacked one of his conquered worlds.